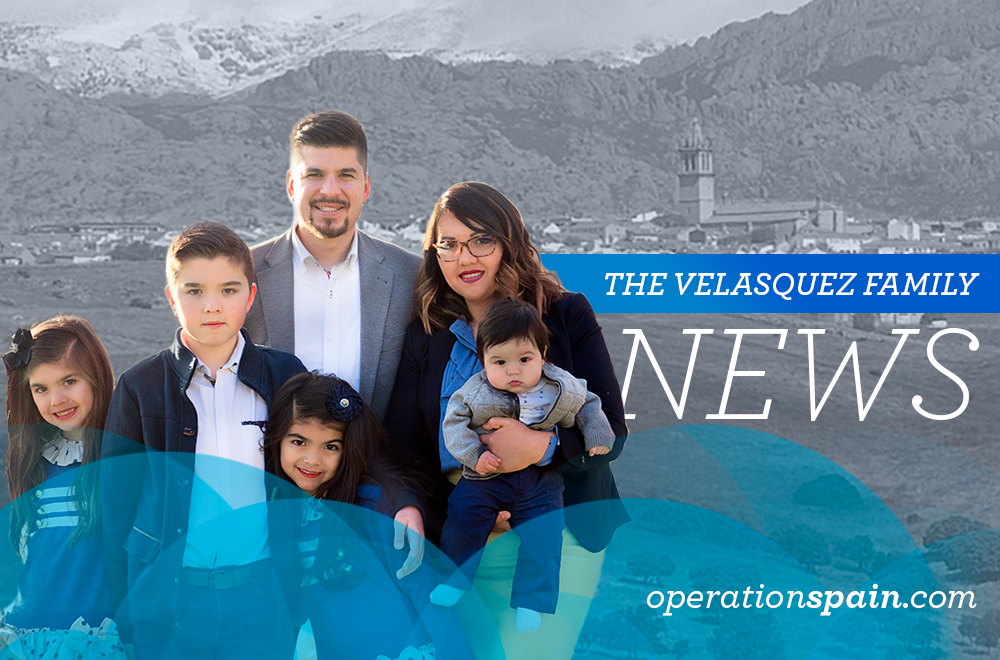 When we started the Parla Baptist Church with my parents (Julio and Andrea Velasquez) and brother-in-law and sister (Jeffrey and Deanna Andrews) we hoped and prayed that God would raise up men to lead the church and even be launched out to start new churches. Twelve years later we are beginning to see God answer those specific prayers. Paco, one of the very first men saved in the Parla church was ordained last year and just a few weeks ago two more men, Flavius Tabardau and Jhorddy Torrealba, were ordained for gospel ministry. All glory be to God!

Flavius was also saved in the Parla church. He started coming as a teenager in 2014 when his mom invited him to the church. I remember that he would sit in his chair with a very serious look on his face. It was difficult to discern whether he was mad or convicted. But by the grace of God, the Word triumphed in his life. One Sunday as he was listening to a simple biblical sermon from the book of John, the Holy Spirit convicted him of his sin and need of Christ, and by a supernatural work of God, he believed the gospel right there where he sat. The fruit of his conversion was clear early on. He started reading the Bible, memorizing Scripture, pouring over every solid book he could get his hands on, and serving God’s people. Just a few weeks after his conversion he had already memorized the entire book of 1 John! As he continued to grow spiritually it became more and more evident that he was a candidate to be a pastor someday. So I began to spend many hours a week with him training him for ministry. I, of course, was not the only one. My father, Julio Velasquez, helped him greatly and modeled what a faithful pastor looks like. He grew in his knowledge of the Word. He grew in his love for people. He even grew as a man as he learned to work with his hands and faithfully provide for his wife and children as he served the church. So as his desire to pastor grew, and as the church observed his biblical qualifications for ministry, it was clear that he needed to be set apart by the Parla church for the pastorate.

Jhorddy started coming to the Parla church after I had already left Parla and begun to focus primarily on the Colmenar church. He came to Spain from Venezuela in order to find work so that he could bring his wife and children as well. Jhorddy was already a believer when he came. He had come to faith in Christ under my uncle’s (Carlos Arce) ministry in Venezuela. He had also been trained for ministry at the Bible Institute there. From day one he served in any way he could and like Flavius showed through his life and practice that he not only had the desire to pastor, but that he was qualified to do so. The Lord has given Jhorddy a burden to plant a church in the future. We pray that God would help the Parla Church to send him out as a church planter if it be His will.

As I preached at the ordination of these two men, I couldn’t help but pray that God would continue to work in Parla and Colmenar. But we know that God has chosen to work through the proclamation of the Word. That is why we are excited about the possibility of recording high quality videos that we can use to reach people where they are. We know that the “Come and See” studio is only a tool, but we believe it could be used in a mighty way for the furtherance of the gospel in Spain. The idea is to produce video and audio content that we can share through social media with the goal to connect with people face to face. That is why the videos would have a link that would allow people to take the next step in discovering Biblical Christianity, whether that is to meet up one-on-one with someone, to participate in a group bible study, or visit a local church. We even want to develop a survey that would serve a dual purpose: open up doors for evangelism on the streets and allow us to know what kinds of questions people have so that we can answer them on the videos and podcast. We have already received gifts from two churches, totaling $1,025.25. We still have another $10,974.75 to raise, but we know that the Lord will provide if it’s His will. In the meantime, we will continue preaching the gospel! Favi and I (with Jackson) are making a quick trip to the states in April to bring back some audio equipment that was donated for the Colmenar church. We are going to take advantage of the trip and visit a few churches. We appreciate your prayers! God bless.

What is Operation Spain?

Operation Spain is the church-planting ministry of the Velasquez family. We have created this website to communicate the need for the gospel in Spain and to share what God is doing through our family. We pray that God will raise up laborers to the least evangelized Spanish-speaking country in the world.